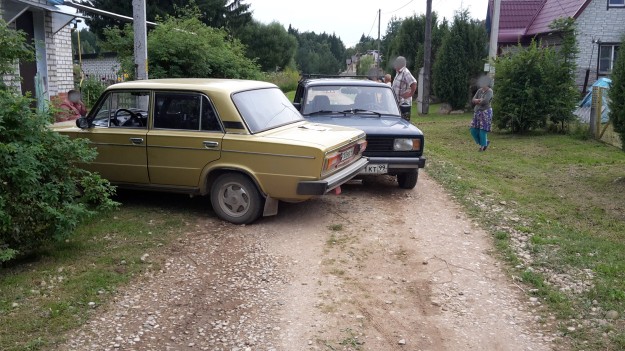 Low-speed prang in the village. Much shouting ensues.

Let’s talk about Russian roads and drivers! No really! Attentive readers may note I wrote about the experience of driving in an earlier post.

That post was related to a chapter in my book about men and cars in Russia and a subsequent article related to it. There was a wonderful tension in some friendships between those that bought ‘bangers’ – oldish Russian Lada cars, and those that took credit out to buy (usually secondhand imports of) German marques, SUVs, etc. Each ‘wore’ their purchase like a badge of honour. For me, car ownership was symbolic of men’s approach to their class positioning and their conscious and unconscious attitude towards the ‘brave new world’ of work. Some were ‘happy’ with the low pay, slower paced, yet dangerous and dirty work in old workshops – firing bricks, making lime, extruding plastic. They ‘nursed’ their old bangers like invalid wives – with affection. Others ‘risked’ the new factories, particularly the higher-paid work in places like Samsung’s monitor assembly. Risky because the work is hard, demeaning, demanding in terms of what academics call ‘biopolitics’ – one has to ‘perform’ being a good worker – turn up neat and visibly sober. Kow-tow to the lower middle-managers. For me this is one meaning of ‘neoliberalism’ in the working-class Russian context (the intrusion of the market into spaces where it was previously absent or moderated by other imperatives). [I know some people object to people bandying around the term ‘neoliberalism’. Case in point. In a recent article, an editor asked me to define what I meant by neoliberalism: for my longer answer, see the footnote on p. 13.]

But talking in general about Russian roads and driving is a really tricky, as indicated by a recent exchange on Twitter. I had mentioned that increasingly punitive traffic laws were designed not to increase safety, but to raise revenue. A point that is often made the world over, not only about Russia. However, as a twitterer pointed out to me, anything that does improve safety has got to be positive, right?

This got me thinking about an ethnographic dilemma that I’ve been trying to solve in a piece I’m writing for publication at the moment. It boils down to this: How, when writing about places that from time immemorial have been presented as somehow backward, lacking ‘culture’, or just plain unpleasant environments, do scholars avoid contributing to those one-sided perspectives?

And this goes for ‘roads’ and ‘road culture’ too. Russians are guilty of this – the famous Gogol aphorism: ‘Fools and Bad Road’. His summary of what was wrong with nineteenth-century Russia is as true today. By any measure, Russia is an outlier in terms of road deaths in highly industrialised countries. 53 deaths per 100,000 vehicles in 2013. Canada is around 9 / 100,000. (The UK is 5, but it too is an outlier – in the other direction).

In the article I’m presently writing, I try (and probably fail) to balance a perspective that says, yes, Russian roads are objectively unsafe (poor design, maintenance, climatic factors), and Russian driving culture is poor because of the way that many drivers did not meaningfully ‘learn’ to drive or ‘pass’ a test. Alcohol use, poor car maintenance and safety are also important. Another truism is the risk-taking culture that is prevalent, especially among men. (I don’t think age is a factor here, some of the craziest are older blokes).

However, these culturally essentialist ‘explanations’ of risk-taking (pofigism), and aversion to rules, are too easy (some would even call them forms of Orientalism). ‘Culture’ is a small part of the problem, in reality. Much more important is a state that does little or nothing to improve safety, and safety culture. Even more significantly, through its daily and longer-term policies, pronouncements and even small actions (like tinkering with the status and rules about what Road Police can do), the state and its representatives show that they values human life so little. Indeed, a great article on this topic (victim blaming) from nearly ten years ago calls this a kind of ‘misdirection’ by an incompetent, uncaring elite.

Such articles, such as this similar one from the Economist, suggest a technocratic/technological fix. As an American journalist put it in 2012: ‘roads reflect a government’s ability to project power and to harness bureaucracy for the common good’. But what if the state has no, or at least a very incoherent conception, of the ‘common good’? Effectively, the common good in Russia is ‘delegated’ to atomised individuals, or only occasionally tolerated NGOs and grassroots organisations. This informal mode of delegated governance is something I’m thinking about a lot at the moment and the ‘incoherent state’ is my working definition of this, but I’d like to improve on it.

However, things do change for the better, and Russia is quite astounding on this account. Responding to delegation (or abdication of the state’s responsibility), driving standards among new drivers are subjectively better now than ten years ago. It’s unclear whether this is partly because of better ‘testing’ while learners. Very rarely in the last decade have I witnessed drink-driving (I did previously see this quite a lot). Similarly, about 6 years ago drivers started spontaneously using a ‘language’ of courtesy – flashing their hazards when you let them overtake you; people do wear seatbelts and use child-seats. I’ve had trouble getting used to cars stopping for me while I’m waiting to cross a pedestrian zebra crossing. Last time I broke down, a motorist stopped to ask whether he could lend a hand. While I don’t enjoy driving on highways in Russia any more than I did twenty years ago, driving culture has certainly improved a lot.