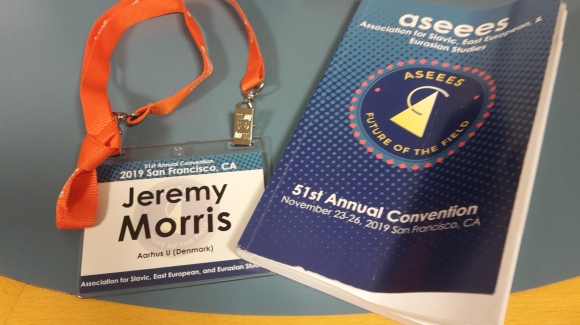 This will be a mainly descriptive post about a panel I attended at ASEEES 2019 (the US Russian Studies biggest conference), in San Francisco. I was lucky enough to act as Chair and Discussant on a panel about Extraction and Erasure in Post-socialist spaces.

Artan Hoxha from Pittsburgh gave an evocative talk about a terra incognito – an area of South Albanian swamp that slowly was transformed over the course of the later 20th century by the Albanian state to become a sugar producing area. When it was rapidly abandoned after communism, Artan was mostly interested in applying the term heterotopia to the processes this landscape was subjected to, including the placing at the centre of this wilderness another wilderness – a secret forest grove used only by the communist elite for pheasant shooting and invisible on the maps. Heterotopia was  useful to Artan because it shows how a noplace becomes subject to mapping by the state; how closed systems are ‘opened’ up; and how inequalities hidden in societies are revealed through uses of space – how different economic systems produce different types of exclusion and inclusion. Heterotopia is a mastering concept, but a loose one.  He draws on a reading of Foucault where heterotopias are ‘real places that manifest imagined realities’ and on De Cauter, who sees heterotopias as spaces that ‘convey and enact the contradictions of the society that has produced them is unable to solve’. One comment I made as discussant was how striking was the absence of people themselves from the story of this place and a lack of emic terms to describe their experience of change. Artan is completing a PhD on this topic and so I eagerly await the other chapters of this project. One potential point of intersection with other work done on comparable projects was the concept of hauntology, which I’ve sketched out elsewhere. I also need to cross-check how his approach squares with the recent work of Verónica Gago, who makes use of heterotopia to think about the meaning of counterfeiting of clothes and consumption in street markets (linked to what she calls ‘neoliberalism from below).

Natalia Koulinka from UoC Santa Cruz, using mainly newspaper sources, provided a really interesting account of two strikes among Soviet miners in 1989 and 1991. She aimed to show how their demands fundamentally changed between the two sets of strike actions to move from narrow demands to more political ones as they sided by 1991 with Yeltsin. For me this showed an interesting paradox. Workers inadvertently opened themselves up to an emergent neoliberal system by embracing piecework – i.e. to be paid for according to productivity results and market prices of coal. Of course this was because they rightly surmised that they were very underpaid. However, as a result, they ended up proposing their bodies as ‘private property’, believing that the market would allow worker control as a solution to inefficiency – a kind of neoliberal autonomism! – a propertizing of the self that meant that when domestic coal lost its value, they to were devalued – despite a parallel call for collective ownership of the mines. Their calls for greater wage differentials reminded me of the ‘inadvertent’ neoliberals argument put forward by Olga Shevchenko in a very different context of post-socialism. Like other postsocialist selves, they embrace an idealism about marketized reform (efficiency of the market, just reward for work). Natalia’s paper is important because she shows how it was not just liberal intellectuals who were ‘guilty’ of this.

This insight potentially linked the papers in this panel. I was much reminded of Aronoff and Kubik’s book chapter criticising Sztompka’s notion of ‘civilizational incompetence’. Katja Perat’s paper that followed Natalia’s, focussed on how Central European intellectuals end up ‘sacrificing critical thinking’ due to their eagerness to claim their Westernness in the face of the ‘civilizational’ threat of communism. Katja’s reading of intellectuals’ Hapsburg nostalgia, in her view, allows later 20th century history to ‘carry all the blame’ for CEE ills. With obvious implications in the politics of the region today.

It was very striking how Natalia ended with a personal note – that as a former citizen of the USSR she had never imagined how any Marxian framing might be relevant to historical scholarship. In fact for most of her adult life she had strongly believed that Marxism could be no more than crude propaganda in service to the state. Her paper reminds us that the work of self-reflection is still ongoing among intellectuals about their idealisation of non-communist systems and anti-communist modes of thought because of an understandable personal allergic reaction to actually-existing socialism.

The final speaker, Katja Perat from Washington U in St Louis, did a switcheroo on me – changing her paper from one of which she dwelt on the demonization of communism among CEE intellectuals, to a more focussed reading on the meaning of the toilet bowl in the novel The Unbearable Lightness of Being by Milan Kundera! In the first paper she criticized Kundera’s proposal that CEE had been kidnapped by communism – and the interpretation of it as a tragedy of the later 20th century. In this newer paper, Katja employed Žižek to explore the khazi as a space of revelation, inspection and revolutionary expulsion. The bog symbolises class vertigo under communism – the emptiness below us and that we are destined to fall. This complitshitfest (®) was a wonderful end to our panel, but my scrappy notes illustrate how difficult it is for a chair/discussant to follow a read-out paper without prior access to the written version. And this despite my enthusiasm for excreta-examining and scatological scholarship. If I was to give Katja advice it would be to look at what Georges Bataille [opens as a pdf] has to say about excess/excreta (sfw) and maybe bring in Mary Douglas on matter out of place…

I may come back to my (largely positive) ASEEES experience in a subsequent post. There were plenty of interesting papers, and it was an important event for moving forward with a collaborative project on Russian Urban Activism, led by Regina Smyth and involving Andrei Semenov, Perm State University.