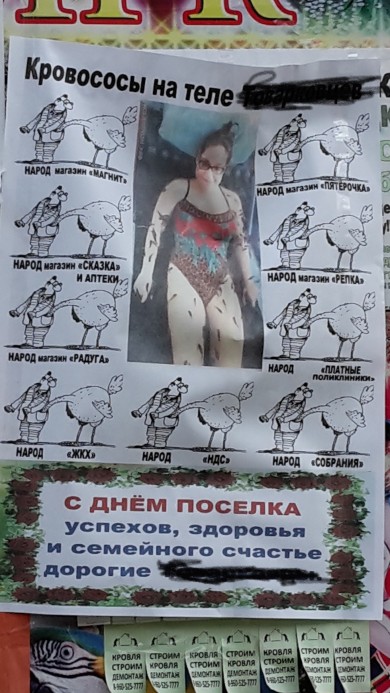 DIY social protest in my locality against the costs of living. ‘Leeches on the body of the town’.

I’m still mentally digesting the extreme push-back I’ve encountered in the field this summer against the Moscow protests.

In the meantime here’s a holding thought based on a viral video of a woman interviewed a couple of days ago. Asked about the protests she responded along the lines of : ‘I’m for stability.’ She’s asked to clarify: ‘Is this a good form of stability?’ She answers ‘Yes’. Then some kind of extreme anger clicked in and with a smirk she said ‘If the liberals come out on the street again I’ll fuck them over with chains.’

What’s interesting to me is that this extreme hostility to the protesters is closely echoed in my small sample of Muscovites, but not among my provincial or ‘working-class’ people. So my main conclusion is that people who are hanging on to their tenuous middle-class life-styles feel threatened by change more than the ‘have nots’.

There’s also a generational aspect to this that I’d like to explore more (particularly as I’ve been inspired by Mikhail Anipkin on this topic). I have to say I was shocked talking to a couple of Moscow pensioners well known to me. One of them used to be very ‘anti-Soviet’. They were very hostile to the protests and in particular vilified the ‘young idiots’ taking part. I shouldn’t have been shocked of course.  For one, both these people exclusively get their news from state-controlled TV and radio. But more importantly, these are people who are most comprehensively ‘cushioned’ by the state and Moscow government, and perhaps naturally fear change. Their pensions and Moscow city benefits mean their ‘real’ disposable incomes are in fact higher than most working people in the rest of Russia. Don’t get me wrong. I’m not saying that Moscow pensioners are comfortably off, or undeserving of social support.

Without sifting in detail through our conversations their responses contained the usual tropes showing the effectiveness of mainstream media’s aims of inculcating cynicism and passivity: ‘Don’t rock the boat, you might fall out…. Anything to avoid a war….. Stability is worth any price… How is it different from the ‘yellow vests’?…. Protests achieve nothing…. There’s corruption everywhere…. Putin has done so much for the people…..’ Certainly part of what’s at work is ‘naive monarchism‘, but rightly that definition has been criticised and can only very sketchily describe those that see Putin as doing his best to act as arbiter. Perhaps generational cohort analysis alongside looking at incomes and privileges would be useful – certainly some scholars are working on more nuanced evaluations of support/critique of the status quo.

Of more interest to me and my research agenda was the much more muted and indeed nuanced response of those people outside the warm yet sickly Sobyanin embrace. Mainly the response was indifference, with a few people supporting the protests on the grounds that at least ‘young people’ were trying to stick up for themselves (yes, I know that the ‘youth’ focus is a mischaracterisation).

Continuing immiseration and the bifurcation of society

Locals quickly tired of a conversation about Moscow protest so lacking relevance to their own lives. The overwhelming impression was of accelerating immiseration. For the second time I was shocked. This time by the fact that two of my long-standing friends had completely given up on formal employment and dived head-first into a subsistence, black economy existence.  While I’ve written at length about this before, it was striking how they described the deterioration in living standards over the last year and their complete lack of hope.

I also interacted with people trying to make their way in factory work and who were a little more hopeful. Nonetheless it was striking how even reasonably successful blue-collar workers with or without family rely on short and long-term credit for unavoidable living costs (like automobiles, housing costs).

A big complaint was the high bank rates on loans, something articulated just the other day in an embarrassing public question to the Vice President of Sberbank at a youth forum: ‘why is the rate in Russia for Sberbank on average 13% when in the same bank branch in Czechia it is 6%?’  Overindebtedness is a massive issue moving forwards that is going to bite the state in the backside soon. Debt jubilee and bailouts coming this way? Meanwhile, with real incomes continuing to fall, ordinary people struggle to avoid falling further into debt, struggle with bills and petty fines. The ‘them and us’ bifurcation of society into the precarious many, versus the ‘I’m alright, jack’ few, is accelerating as illustrated by two encounters a few hours apart in my humdrum Russia summer:

A friend, ‘Ilya’, arrives in his beat-up car at the village and borrows a few hundred roubles for petrol (he’s on empty as he has no money as he’s unemployed). We investigate how to fix the leaking roof of his village house.  It would be great if his disabled pensioner mother was able to come out and stay in her favourite place. The only option is to completely strip the roof and relay it, something he can’t afford to do. Thanks to the stupid dachniki (summerhouse dwellers) who feed stray dogs, their population is expanding and they have invaded Ilya’s little garden veranda. He has no lumber to board up the entrance, and in any case Ilya’s old powertools are broken and the extension cord he stole from his last job is on the blink. I borrow a battery-powered powertool from another neighbour and give him a surplus old wooden door from my shed to make the veranda inaccessible to the dogs.  This tiny hut stands on a vegetable plot that could be used to help ease the family budget. However, because Ilya can’t even afford fuel, it’s likely he’ll abandon the plot or sell it at a knock-down price to someone like me from Moscow (the land is desirable as it’s in a national park and has retrospective planning permission due to the shack on it).

A few hours later I have dinner with one of my Moscow acquaintances who, between ranting against the protesters as ‘paid-up liberasts by Western governments’ and faithfully regurgitating a media-driven narrative of the dangers of a ‘Russian Maidan’, discusses their latest European trip and how tired they are of the poor quality service and food in Italian hotels. Conversation moves on to the summer employment of their Central Asian housekeeper who is turning out to be a bad investment,  and who will be sent packing at the end of the season. All the food we eat at this dinner is bought from good Moscow supermarkets. These dacha visitors do not buy anything from local shops here in the provinces.  Another guest is surprised by the absence of the cleaning lady that the hosts used to pay to come by taxi from the local town to dust and do dishes. Talk moves on to the latest expensive purchases.

I have no more words at the moment.

A newspaper report on the reality of the high tax burden for Russians which quickly disappeared from any online versions.  While criticised for inaccuracies, it more or less shows that direct and indirect taxes in Russia equate to the so-called ‘high’ tax societies of northern Europe.