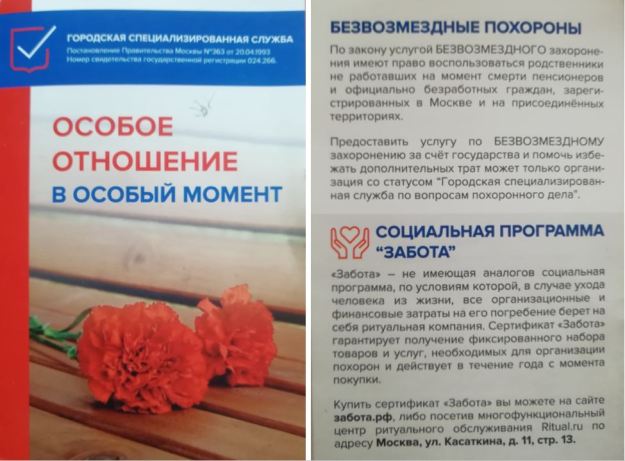 “A special attitude at a special moment”. Pandemic enters the postbox. Image by Galina Orlova.

This is the fourth of a series of Covid tales, made possible by collaboration with Galina Orlova of HSE Moscow. Each post is about different aspects of lockdown and postlockdown Moscow. These are based on one long text that appeared in the journal City and Society. That journal, thanks to my colleague Derek Pardue, who is editor, has published some amazing Covid dispatches – they are open access –  so please check it out.

The last post discussed disinfection and the not-so-smart city.

A booklet from Ritual, the Moscow funeral service and operator of Moscow cemeteries, dropped into our postboxes on the eve of self-isolation for 65+ (26 March – it lasted until 9 June). The use by a commercial firm of the state services’ design suggests a newly cozy relationship between the traditionally shady funeral business and Russian stateness. Last summer, this convergence took the form of a corruption scandal, linked to the high-profile case of journalist Ivan Golunov, framed for his investigation of murky dealings between Moscow undertakers and state security organs. This spring Ritual prepared inhabitants for death and loss, warned against contacts with “black agents”, informed about prices and social subsidies. What was also on offer was something that in the extreme circumstances of pandemic ordinary people expected but did not receive from the state – care. Care, which remains for Russians one of the most important regimes of affective expectations in political communication with authorities, masks hierarchies and injustice – of deservingness of ‘weak’ objects, of paternal relations (Bogdanova 2005). Elena Bogdanova writing on the Soviet period but extrapolating historically to the present, draws attention to – in the absence of a clear recourse to legal means – the practice of complaints and appeals to ‘care’ and references to promises by the state.

Care certificates from Ritual guarantee the owners, if they died within a year of purchase, burial at the operator’s expense. This offer had the side effect of interpellating tenants as potential victims of the virus.

Yandex informed Muscovites about the preparedness of Ritual, that “will come in handy”, for the pandemic: protective equipment and coffins in ready supply. The Ministry of Health published temporary recommendations – later rescinded – including a prescription to bury infected bodies in sealed coffins. WHO and Russian virologists confirmed that the virus is not transmitted from the dead to the living. Funeral services are not under the authority of the Health Ministry. Nonetheless, the protocol was entrenched: coronavirus victims are sealed in bags, and not released to relatives. Ritual posted a “viral” Instagram burial video: a hazmatsuited funeral team, disinfectant poured into the grave, a clutch of relatives frozen in the distance, the pit fill with fir branches as a natural disinfectant and only completed. The union of ritual workers has spoken out against the use of garbage bags as destructive to the social order and turns funerals from care into disposal.

Refusing large-scale support for population and business, the authorities compiled lists for selective state aid. The presidential one featured a child allowance. Moscow – supported the newly unemployed. The government made two lists – for 642 system-critical firms (including bookmakers!) along with a dozen industries extremely vulnerable to the effects of the epidemic. The Chair of the Chamber of Commerce proposed including outdoor ads, which would lose up to 70% of revenue in deserted cities, in the second list. Simultaneously, he emphasised the critical role of billboards in informing people about virus protection, the WWII anniversary, and the upcoming plebiscite. Was this transition from the affected to having critical significance a transition from commercial advertising to propaganda? Did this discursive merging tell us more about saving the industry at the expense of state orders? Even in the small section of my self-isolation route, billboard changes perform the symbolic dynamics of quarantine.

At the end of March, the dismantling of outdoor ads from the frozen centre of Moscow gave way to mobilization. From billboards, placed every 15-20 meters, well-known Moscow doctors urged Muscovites to stay home, wear masks and not touch their faces. After April, this template was adapted to enhance affective solidarity and the formation of quarantine communities. Doctors are no longer given voice, they are thanked. And young people are hailed as volunteers. Closer to the Garden Ring sanitary enlightenment is interspersed with posters for Victory Day. In early summer, commercial advertising has returned as a (post)quarantine hybrid – McDonald’s with both hands voting for hand washing. The epidemiological safety and the upcoming voting in this austere carnival of signs do not leave room for Bigmacs yet.

Lockdown propaganda comes into being. 03-06.2020. Images by Galina Orlova.