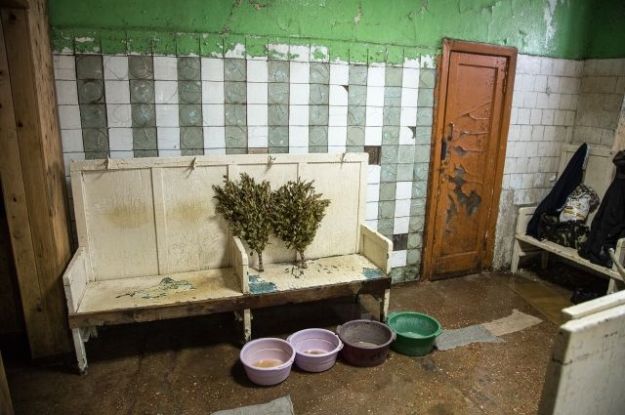 An urban banya or bathhouse

We’re all public intellectuals now. I don’t mean the traditional idea of a public intellectual – like Bertrand Russell. Or Isaiah Berlin, whose death was reported on the front page of the New York Times. On the contrary, it’s a good thing that because of the democratisation of the ‘public sphere’, those who previously would have remained unchallenged having built ‘an entire career … on the trick of contrariness’, can instantly be called out.

Nor do I mean the idea of academics as necessarily critical (which is more than the ‘illiberal practicality’ of ‘impactful’ research), politically engaged in the ‘real world’ in an organic way (in a labour movement or immigrant rights organisation), as argued by Michael Burawoy.

What I’m talking about is the taped-down ‘transmit’ button of social media. [The irony of writing this in a blog post is not lost on me]. The problem is that while social media has enabled us all at the same time to broadcast, few are listening. Or rather, they are ‘hearing’ what they want, often from those least knowledgeable. Perhaps all this proves is the critique of Habermas’ public sphere – that such a ‘bourgeois’ idea of communication always excludes, and cements existing power-imbalances.

And these musings arise from three typical experiences of ‘doing academic social media’ in the last weeks.  Number One requires little explanation to those acquainted with Twitter. Since the Trump election meddling theories began, a number of ‘Russia experts’ have garnered huge Twitter followings and a lucrative career in op-eds. They have three things in common: simple ‘enemy’ message: ‘Trump is Russia’s weapon’, few Russian language skills, and, (this was what came up this week) no record of every having visited Russia. According to Sean Guillory’s definition, these pundits often qualify as Russophobes.

Number Two started with the resurgence of #hautalk. The return of a publically criticised academic to editing an important open access venture in anthropology provoked rage among understandably indignant precarious scholars on the same Twitter platform. The latest Hau episode reveals a ‘wood for the trees’ issue – alternatively known as ‘more heat than light’. While scholars highlighted how their precarious positions had enabled their alleged mistreatment by an editor, there is less attention to bigger structural inequalities. (For a more positive recent story about open access and ‘flipped’ peer review but with similar reservations about power imbalances in academia see this blog post – hint: it’s all about more transparency and accountability).

The fact that this individual had been ‘caught out’ merely underlines the inherent and toxic hierarchical power of academia. The case only came to light because the editor himself is clearly a marginal, perhaps desperate figure. He’s never held tenure (despite being middle-career). He’s not Anglo-Saxon. He’s clearly had to make his way as a journeyman researcher, serving at the favour of powerful intellectual patrons. What’s also missing from this story is the wholesale delegation of grunt journal work from the ‘Board’ to this individual. Now some senior figures involved are allegedly covering their tracks by deleting social media posts or retreating into privileged silence (with the exception of David Graeber, who supported the whistleblowers from the outset).

None of this excuses the allegations made. (See how even microscopically public-facing intellectuals are forced to caveat?) However, the free-riding on this project by senior scholars is another example of the pernicious free labour – ‘trickle up’ that we all provide to the more powerful. We often bemoan the assumption that we must perform free labour, like peer-review, but also we miss out that the main beneficiaries are not just publishers and universities, but our senior colleagues (often indirectly, like courtesy citation of a big name).  Also, as pointed out, the Hau project tended to reproduce academic hierarchies as much as existing journals. 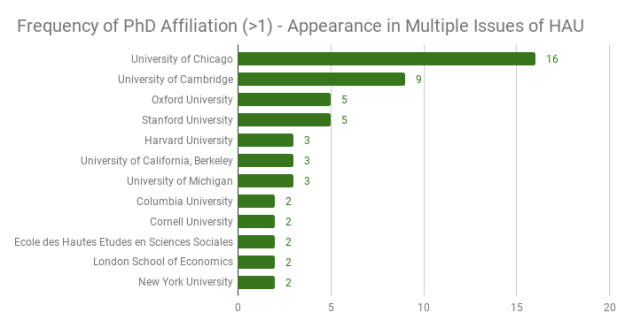 some stats about Hau authors, from footnotesblog.com contributor Jules Weiss

I found a reinforcement of the Hau  experience (more heat than light) closer to home (Russian studies). This week a thoughtful tweet was made about the racial profiling of Central Asians by the Russian police.  Thoughtful, because the author and others were reflecting on the selective solidarity and wilful blindness towards racism by the privileged, particularly academics. So far so good. However, anyone coming to this tweet-conversation might be forgiven for thinking that police stop Central Asians because Russians are ‘merely’ racist. They would not learn that this is due to a structural racism built into immigration laws that enables the extortion of money from Central Asians that serves as part of the scaffold of the corrupt law-enforcement system. I’m not convinced that the causes of this form of racial profiling makes the Russian police more racist in practice than their counterparts in the US or UK for that matter.

Don’t get me wrong, I’ve learnt a huge amount from interacting on social media with academics and ‘public intellectuals’ since 2014, when I started using Twitter. However, I too am increasingly setting social media to ‘broadcast’ rather than receive.  Is this a metaphor for our times? Certainly, a fellow blogger thinks so: ‘the relentless jeering, preening and snark is evidence of the platform’s humanity.’ 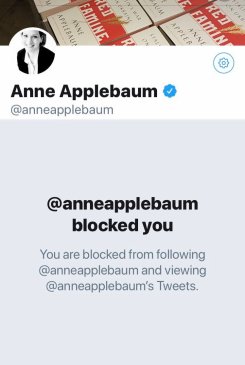 When I was writing about how ordinary Russians use social media a few years ago, I engaged not only with Habermas, but also Negt and Kluge (on the proletarian public sphere) and Nancy Fraser’s counterpublics “where members of subordinated social groups invent and circulate counter discourses to formulate oppositional interpretations of their identities, interests, and needs”. At some point I’d like to return to the PPS works, for the obvious parallels with the democratising and oppositional potential of social media. Negt and Kluge argue that the latter could potentially oppose the organized interests of the bourgeois public sphere through its organization of human needs and interests. On the other hand talk about the PPS is not million miles away from the banya full of spiders that is Twitter and other social media, in that they are evidence of “the “excluded”, vague, unarticulated impulses of resistance or resentment. The proletarian public sphere carries the subjective feelings, the egocentric malaise with the common public narrative, interests that are not socially valorized.” To my knowledge, Negt and Kluge’s ideas have not been applied to internet as a public sphere, (they wrote on public television and radio). Mark Poster’s piece still seems to be the main way-marker here.

So, what positives can we take forward? Well, strange as it may sound, I’m increasingly turning from Twitter to YouTube as a creaky, yet good-enough model for public intellectuals. And ironically, Russia leads the way here precisely due to academics’ exclusion. Deprived of airtime on traditional media, political oppositionists have long worked hard on building audiences in alternative media spaces. I’m still blown away by the slick, controlled operation that is Navalnyi. YouTube is a medium made for this. However, academics are catching up and using it for a unique ‘long-form’ dialogue. Because of the low ‘cost’ (I mean time and effort as much as financial) YouTube is ideally suitable for a real dialogue between people with an enthusiasm for and in-depth knowledge of a topic. Two almost random examples. The genuine public intellectual and recently sacked from MGIMO Valerii Solovei talks to Boris Kagarlitskii about the disintegration of the ‘ruling party’ system in the Russian regions and the bigger question of social or political ‘revolution’  in Russia. A little stilted, a little forced, but nonetheless some kind of dialogue between a ‘socialist’ and a ‘liberal’. Solovei already had a huge media following of course, so now he’s persona non grata it’s disappointing that he does not link back to the original version of the talk, hosted by Kagarlitskii. We still have academic hierarchies reproducing themselves. A less visible and possibly more rewarding example:  Alexander Dmitriev and Viacheslav Morozov in an accessible version of the their work on Russia as part of Europe, indigenous knowledge, postsocialist trauma and the ‘spritual bonds’ of Putin’s Russia. While this video was produced by Gleb Pavlovskii’s Gefter project, there’s nothing to stop scholars from more DIY collective approaches. Indeed, by involving students and colleagues they might get more traction than the under-appreciated Gefter videos.  I come back to the spiders in the bathhouse analogy (which is apt if we think of social media as an external punishment of confinement and the nearness of others). If spiders are inevitable company, any old bathhouse will do. They’re there in the corners, for eternity, but it’s who is sitting on the plank with us that matters. 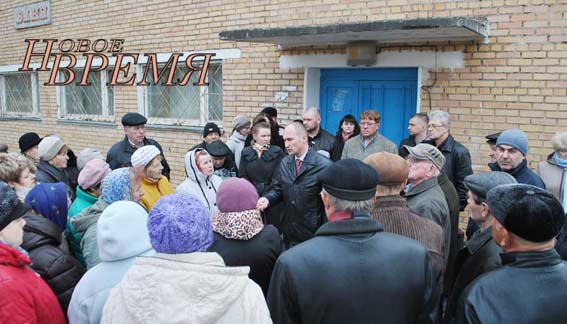 The reopening of my local public bathhouse